Clipping Loss: Energy goes to waste during the day 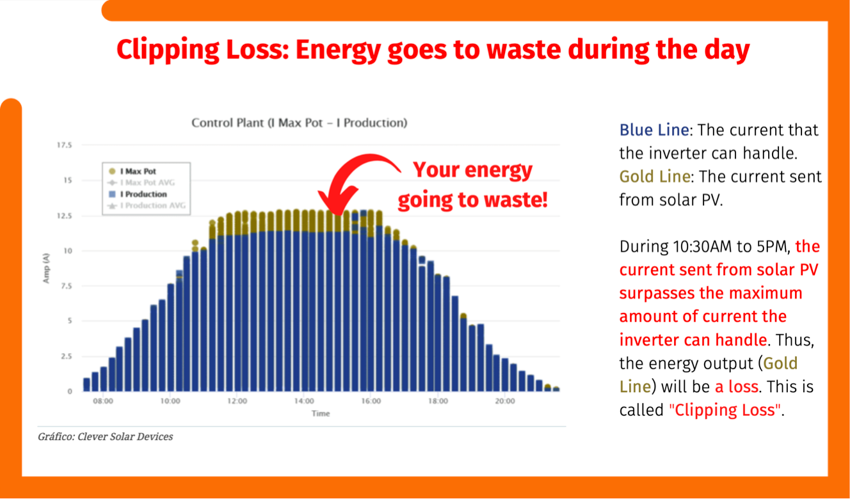 Thanks to our device Clever Dx, the effects and performance of other devices equipped with solar PVs became apparent in real-time, such as AC/DC inverters. AC/DC inverters are common devices where solar PVs modules are connected, and AC/DC inverters convert the current from solar PVs (DC) to alternating current electricity (AC). AC electricity is how energy is consumed in houses, industries, and everywhere.

Clever Dx showed that the current sent from solar PVs is higher than the amount of current that inverters can handle. Between 10:30 AM to 5:00 PM, as you can see in the graph, the current sent from solar PVs (Gold) is higher than the amount that the inverters can handle (Blue), due to the installation design. We could see this phenomenon thanks to the flatness that appears on the current that the inverter can absorb (blue). So what happens now is that some energy (Gold) will go to waste as it can not be converted. And this is called, Clipping Loss.

This is just one of many examples of what Clever Dx can detect at the module level that brings the capability to audit other elements in the power plant installation. Clever Dx measures and analyses the details of the IV curves (the possible combination of current and voltage output of a PV), maps with layers to study meteorological effects, and even reports on billing or CO2 improvements, which are all crucially related to the productivity of PV plants and in close relation with its efficiency, but most of all, the financial profitability of your solar PV business. Indeed, a 12% improvement in plant production was achieved by Clever Dx.

Inefficiencies that create the loss of profitability will be even bigger for larger PV sites. For instance, in the case of 280 MW installation, up to 100 million euro reduction in billing during the lifetime of installation can be achieved. Despite the boom of solar PV installations across Europe and the world, the efficiency issue of PV sites is not yet addressed sufficiently. By measuring the maximum points of IV curves of each solar PV module, Clever Dx made it possible to check the power dispersion that implies inefficiencies and therefore energy losses.

And last but not least, we recommend you to try out this sort of analysis in the first years of installations to detect any defects as early as possible, while the warranty of solar PV is still valid.

Clipping Loss: Energy goes to waste during the day