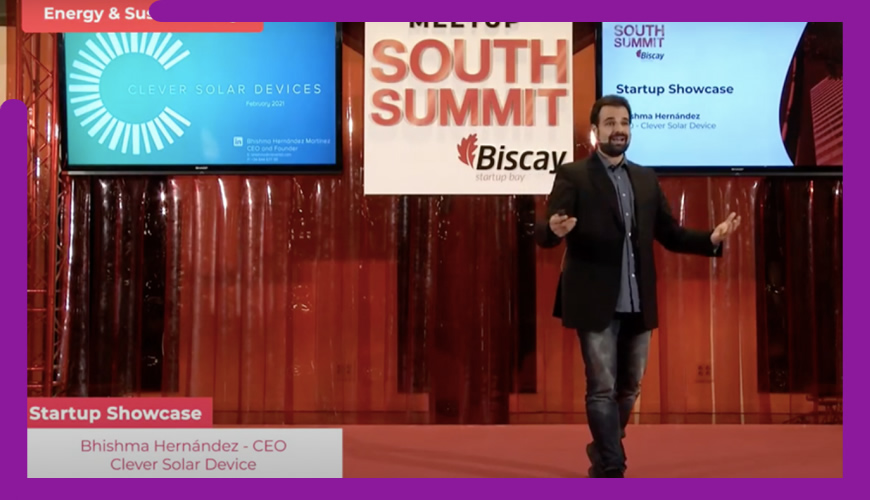 South summit’s aim is to internationalize innovative projects while pitching entrepreneurs that are facing big challenges related with technologies and digitalization.

Bhishma presented Clever Solar Devices in 10 minutes. He showed CSD’s achievements last 2020, such a difficult year that was fulfilled with numerous accomplishments.

Secondly, Bhishma explained the value proposition of Clever Solar Devices that is based in 3 pillars: innovation, efficiency and accessibility.

Moreover, the challenge that Clever Solar Devices is going through was projected and it’s market position as a potential solution for many business within the solar industry as key, not only to reduce costs but also to increase the efficiency of the PV plant.

In addition, Bhishma justified through roadmap the path that Clever Solar Devices has followed from it’s beginning on-goin. Besides, public fundings that were granted which allowed it to keep developing Clever Dx.

To end up and following the timing set, Bhishma concluded talking about the return of investment after using Clever Solar Devices but also about the saving costs up to 75%. The startup will keep working to reach the final event where national e international figures will meet again in October.

Energética Magazine: Artificial Intelligence (AI) and Deep Learning as the future for O&M focused on improvement for operators, reduction of labor risks, and sustainability.